The full day trip from Marrakech to Ouarzazate and Kasbah Ait Ben Haddou is ideal for those of you who cannot spare more than one day to get a sneak of Morocco Sahara desert. Take this round trip of 400 km across the Atlas mountain range via the Tizi Ntichka pass at an altitude of 2269 meters above sea level. Marvel at the brilliant landscape views dotted with Berber villages. Visit the legendary fortified Berber village of Kasbah Ait Ben Hadou and its sister town of Ouarzazate famous as the Hollywood of Africa.

Your private full day tour of Kasbah Ait Ben Hadou and Ouarzazate will start early in the morning ( 07h00 AM ) with a pick up from your hotel /riad.
Drive east of Marrakech crossing the windy high Atlas Mountains and Tizi Ntichka pass. Numerous stops will be made along the way to enjoy the views, take photos, stretch your legs or drink a cup of coffee.
Visit Ait Benhaddou village (where Star Wars were filmed). UNESCO as one of the world’s cultural treasures has classified the fortified village of Ait Benhaddou. It is studded with crenelated towers and its buildings decorated with geometrical motifs and are considered to be one of the most beautiful villages of this kind in Morocco. A program of restoration work is currently under way to encourage the population of the village, which is at present inhabited by just five families.
From here, continue to Ouarzazate, which marks the beginning of the Sahara desert. Visit Taourirt Kasbah. This former Glaoui residence, situated on the edge of the town, on the road to Morocco Sahara desert, is considered to be one of the most beautiful kasbahs of Morocco. It consists of a maze of luxury apartments, simple clay houses and crenelated towers, which are lavishly decorated with geometric motifs. Part of the fortified village is open to the public.
After some time at leisure for a cup of mint tea or coffee, drive back to Marrakech later in the afternoon while crossing the High Atlas Mountains.
Your Full day trip from Marrakech to Ouarzazate and Kasbah Ait Ben Haddou will end late in the afternoon by a drop off at your hotel or in the city center.

Know Before You Go:

How far is Kasbah Ait Ben Haddou from Marrakech?

The distance between Marrakech and Kasbah Ait Ben Haddou is 180 Km (112 miles) via N9 across the High Atlas Mountains and Tizi N’Tichka pass, then deviate on P1506 to the Village of Ait Ben Haddou.

How far is Kasbah Ait Ben Hadou from Ourzazate?

Distance between Kasbah Ait Ben Hadou and Ouarzazate is 30 Km

Is Ouarzazate located in the desert?

It depends on what you consider as a desert. If it is sand dunes, camels and camps, NO, Ouarzazate is not located in the Sahara desert. You still need to drive an extra 5 hours to reach such a desert in Mhamid or Merzouga.

Is Ouarzazate worth visiting?

Ouarzazate is located at the gates of the Moroccan Sahara desert. The major attractions to visit on a Ouarzazate day trip from Marrakech are the Kasbah of Telouet, Ksar Ait Ben Haddou, Atlas Film Studios and The KAsbah of Telouet. The scenic drive through the High Atlas Mountains and Tizi N’Tichka pass is amazing. However, the drive is VERY long: 4 hours drive from Marrakech to Ouarzazate on curvy roads can not be supported by so many.

What is Ouarzazate is Famous for?

Beside Famous film studios like Atlas and CLA. It is also known for its art and culture. You will be amazed to see how the people of Ouarzazate create their houses which adopt to all kind of weather hot and cold because temperate in Ouarzazate varies a lot in summer it can reach up to 48 C°

It is believed the Ksar was first built during the 11th century ( during the Almoravid period ). However, non of the existent buildings date to before the 17th century. The strategic location of the fortified village in Ounila Valley made it an important stop for trading caravans since the 11th century crossing the Sahara desert to Marrakech and Fes.

How do I get from Ouarzazate to Ait Ben Haddou? 1 days6
8
Day Trip to the Atlas Mountains from Marrakech
40.00€
Explore 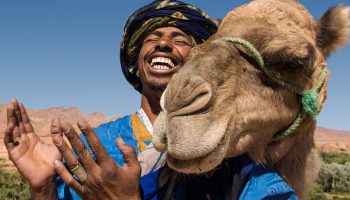 Need help? Get in touch with us

Your dream Marrakech desert tours be it from Marrakech or Fes are about to become a reality with us ! You’ve come to the right place and you are just one click away. Tell us about it, we are the Moroccan desert dream experts !